All paintings are framed. 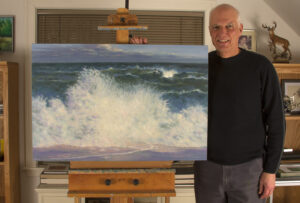 William Gotha
Bill Gotha has been painting all his life, but began painting professionally in 2014. He specializes in New England landscapes and seascapes; his favorite medium is oil paint. He paints en plein air and in his studio in Andover, MA. Pictured left with Wave Action II, 24” x 36”, oil on linen. He minored in Fine Art at Holy Cross College in Worcester, Mass. where he studied under plein air artist John Reardon. He has also studied advanced drawing and painting at the Museum of Fine Art in Boston and illustration at the George Walter Vincent Smith Art
Museum in Springfield, MA. He is a former naval officer, was art director for several publishers in the Boston area, including Sail Magazine, and managed an international marketing company for 20 years before launching his painting career. Bill had his first one-man show at Greenwald Gallery in Lowell, MA in 2016. In reviewing the show, Artscope Magazine remarked, “His work conveys the atmospheric feelings of the locations he paints, be it grass blades close by or threatening storm clouds hovering over distant mountains.” Bill’s most recent solo exhibit was in 2019 at Gallery 31 Fine Art in Orleans, MA on Cape Cod.